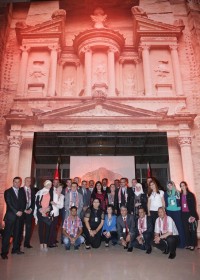 Under the patronage of HRH princess Sumaya bint El Hassan, and for celebrating 200 years of Petra discovery, the exhibition Petra, Desert Wonder” was opened in The Jordan Museum started from 17th of July 2014and will last for several months.

The Exhibition is taking its visitors on an interesting journey of discovery throughout the museum halls; on the ground, and upper floors to explore some of the most beautiful and impressive prominent sites of Petra.  As well as to know the greatness of the Nabataeans the ancestors of Arabs and their culture and arts, in creating Petra and adopting it as their capital in southern Jordan, before more than 2000 years.

Appreciating the cooperation of the D.O.A; in lending their unique collection of Petra’s artifacts which are displayed in front of huge pictures of the city, which restores life to Petra in the eyes of visitors.

It is worth mentioning; that the exhibition has begun its journey under the name "Petra. Miracle in the desert.”was first shown at the Antikenmuseum Basel und Sammlung Ludwig in Switzerland on 23 October 2012 – 17 March 2013. It then moved to the Dutch National Museum Rijksmuseum van Oudheden at Leiden in the Netherlands from 9 October.

2010© JNM. All Rights Reserved. Reproduction without explicit permission is prohibited.