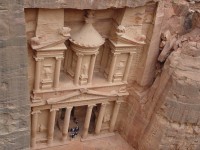 The exhibition entitled ‘Scheikh Ibrahim and Petra 1812-2012’ will be held to mark the bicentennial anniversary of the rediscovery of the city of Petra by the Swiss traveler Burckhardt. The exhibition is a joint project of the Basel Antikenmuseum, the Department of Antiquities of Jordan and The Jordan Museum. The exhibition will present Burckhardt’s rediscovery of the city of Petra for the Western world, as it was already well known to the Arabs. In addition, the display will focus on the Nabataean capital in its heyday, which dates from approximately the end of the 2nd century BC until the beginning of the 2nd century AD. It will present the people of Petra, their daily life, their economy and their foreign relations. Through this presentation the exhibition will also showcase the Swiss excavations in the heart of the city, and the resultant studies which are among the most important concerning Nabataean Petra. The exhibition will play an important role in introducing the fascinating Nabataean culture and the city of Petra in Jordan. It will also present the works of Arab geographers on southern Jordan during the Middle Ages, as well as life in the region two centuries ago, both of which are important topics that are only rarely presented to the public.

2010© JNM. All Rights Reserved. Reproduction without explicit permission is prohibited.